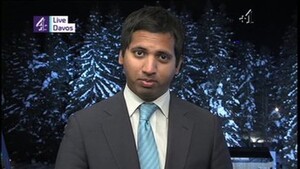 Faisal Islam, economics editor at Channel 4 news, who tweeted yesterday about the Merkel-Kenny meeting. We’re Faisal groupies. Followers of Islam, if you will.

“The suggested hit to the people that provided the kerosene for AI, AIB, and BoI to fire into the Irish property sector did not happen. The senior bondholders were spared. Yes Michael Noonan, Ireland’s new finance minister, muttered something about sharing the burden with “subordinated bondholders”. Well that’s already happened after some coercive tenders under the previous government. A new effort “will generate low billions” said one bond trader I spoke to, who added “senior bonds are up big tonight, the holders are happy”.

Another absent friend was some sort of medium term help from the Frankfurt-based European Central Bank. That had been suggested as part of a deal between the ECB and Ireland to spare the senior bondholders and keep investor faith in eurozone periphery markets. It would have helped Ireland’s new banking system transition away from the life support of the ECB’s €150 billion short term liquidity assistance. But no, didn’t happen. That’s significant if you believe Reuters well-sourced account that “Euro zone official sources told Reuters on Thursday that due to internal disagreements within the ECB’s Governing Council, plans to announce a new liquidity facility for Irish banks had been scrapped.” http://reut.rs/f8vTrG

The ECB General Council features representatives from all Eurozone countries aswell as executive members. The ECB is a fiercely independent institution but there is something big occurring in the background as regards Ireland and the other bailouts..”

“….There is a consistent reference in the main Euroland powers to Ireland “not putting anything on the table”. For France that is clearly some rethink on the 12.5% corporation tax. This may be unthinkable for Ireland, but then it needs to come up with something else fairly quickly. I fear the lack of explicit ECB support is connected to this rancour. Could it mean even more tax rises and spending cuts for the hard-pressed Irish?”