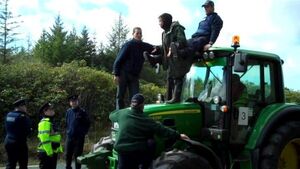 POLICING of the Corrib gas dispute has amounted to over € 14 million to date.
This huge sum is set to rise sharply over the coming months with expected protests increasing as Shell builds the longest raw gas pipeline tunnel in western Europe.  The subsea tunnel, which is through a Special Area of Conservation,  will take over two years to build and will involve around 472 truck movements a day, along the narrow, winding roads in this rural area.
A number of complaints about aspects of policing have been made to the Garda Ombudsman.

A report by the Frontline human rights defenders’ organisation last year expressed concern about some aspects of policing the Corrib gas dispute by both the Garda and the private security firm employed by the developers.

The report, by barrister Brian Barrington, recommended that gardaí who had been involved for long periods on the dispute should be deployed to other duties, such as community policing.
It also suggested that the Garda Siochána should appoint a trained lawyer with relevant experience in human rights issues  to review police policies and practices.