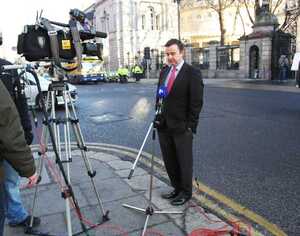 Brian Hayes, junior minister for public sector reform, gave a speech to the IPA conference, entitled ‘Good Governance – setting the tone from the top’ this morning.

b) However, he urged us to come out from under the “comfort blanket of victimhood” and stop blaming others for our problems.

c) “Rejecting European support, retreating to a bunker, sovereign default, abandoning the euro, are just pages from the North Korean textbook of economics,” he said. “The only realistic option is the Munster rugby option – stand up and fight.”

d) We must “fight our corner” because the government is on “the long road” to recovery.

e) We will not be “bullied or intimidated” on “the international stage”.

g) “The sunlight of public scrutiny is a strong prophylactic against public waste.”

So we’re the Munster rugby team, and we’re boxing, on a road, a road that’s also a stage, while simultaneously playing something that isn’t poker. Fortunately the sun is shining and we’re wearing a condom on our head.