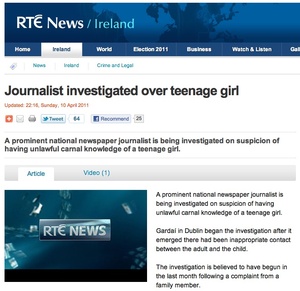 Journalist Investigated Over Teenage Girl (RTE News)
.
.
This story was broken yesterday by Paul Williams in the Irish News of The World (not available online):

A WELL-known journalist is at the centre of a shocking child sex investigation.The best-selling author, who can’t be named for legal reasons, has been accused of having a sexual relationship with a 16-year-old girl member of a Dublin GAA club.

It’s understood she’s known the journalist since she was just 14. A Garda investigation was launched two weeks ago after the writer’s daughter allegedly found sexually-explicit text messages he’d sent to the girl on an old mobile phone.

The daughter made the discovery when she put a sim card in and found the sordid texts. The journalist had given the phone to the teen who was collecting them to donate to a charity.
She showed the messages to her mother, who then took the phone to gardai.

On being found out, the journalist allegedly tried to take his own life. He’s now receiving medical care.

The Garda Domestic Violence and Sexual Assault Unit has been called in, and officers are planning to interview other members of the girl’s GAA club. The standard practice in such cases is to discover if other children have been in contact with or were abused by an alleged perpetrator.