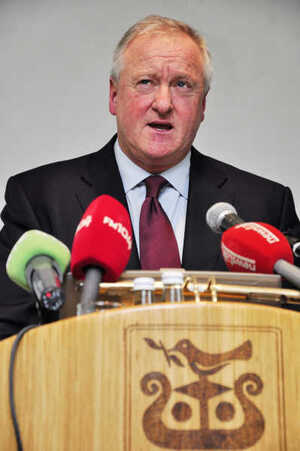 Colm Doherty, who joined AIB in the late 1980s, was appointed managing director of the bank in November 2009.

Former foreign minister Dick Spring, who had been asked to vet potential candidates, assured Brian Lenihan, who wanted a candidate from outside AIB, that Doherty was the right man for the job.

One of the problems outlined by Spring in finding decent external candidates was the renumeration package of no more than €500,000 a year.

This was the figure Lenihan had capped bankers’ salaries in the wake of the financial crisis.

Less than a year after his appointment Doherty was let go and, according to the Irish Times this morning, trousered €3million.

Cash payment (in lieu of a contribution to his pension): €2 million.

In March 2010, Emmet Oliver wrote in the Sunday Tribune about the background to Doherty’s appointment and pay package the year before.

“However the deal as agreed, admittedly informally, unravelled on Monday when AIB sent over their proposals for Doherty’s remuneration at 7pm, the night before a cabinet meeting. The Department of Finance had requested this paperwork so the cabinet could be informed of the details of the proposed arrangements. However, later that evening the Irish Times reported that Lenihan had already approved the pay arrangements at levels above €500,000, contrary to the terms on bank compensation as stipulated by the so-called Ciroc report, which was issued earlier this year.

Lenihan described the story in the Irish Times as “inaccurate” and told his cabinet colleagues the government would not be assenting to pay rates above €500,000 and certainly not for people already working at AIB (the door was always left open to higher pay for anyone outside the jurisdiction who might need an extra incentive).”
However, what remains a mystery at this point is who precisely proposed Doherty’s higher remuneration request in the bank and what were they thinking?”