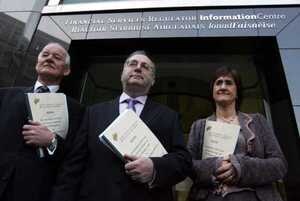 Contrary to public perception at the time, lending at Anglo and INBS had proceeded with insufficient checks and balances during the period,” the report said.

Mr Nyberg found that the Financial Regulator Patrick Neary hesitated over whether to come down hard on the two lenders after problems were identified.

“Had the Financial Regulator rigorously enforced its recommendations to improve structures and process, it is possible that Anglo would have grown its property lending in a more prudent manner,” the report stated.

“Moreover, determined public action by the Financial Regulator early in the period could possibly have meant that other banks’ prudential standards would not have deteriorated to such an extent over the period.”

Remind us again how much Patrick Neary’s golden handshake was when he was forced to retire?