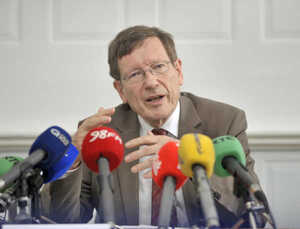 The Nyberg report [by Finnish banking expert Peter Nyberg, above] – which is due to go to Cabinet this morning – is understood to be highly critical of the banks, financial regulators and the Department of Finance.

The inquiry is said to have spared the former Fianna Fáil-led government from its most severe criticism of systematic failures of governance. However, the investigation is understood to have severely criticised the lack of governance in banks, serious systematic failures and shortcomings in the Central Bank and in the former financial regulator’s office, as well as in the Department of Finance.

A copy of the report was recently sent to the DPP, the Garda Síochána and the Director of Corporate Enforcement, but as no individual is named in the report it did not prejudice any other inquiries.