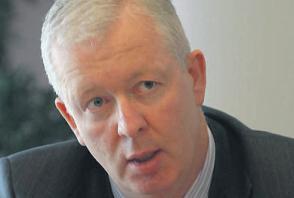 Pat Neary, toothless financial regulator with the toothbrush moustache, retired with a massive golden handshake and a generous pension.

But he did not act alone.

When he did not act, as it were.

Con Horan (above) was  head of ‘prudential supervision’ in charge of banking regulation at the financial regulator and was directly answerable to Neary.

In fact Con signed off on the €169 milion loan to buy up some of Sean Quinn’s shares in Anglo, currently the subject of a slow-moving criminal investigation.

So what happened to Con?

But that was before the damning Nyberg report, which last week prompted Michael Noonan to demand of the banks a “board renewal plan” saying that – because the crisis happened on their watch – it was right they should move on.

By that logic it must be curtains for Mr Horan.

Con this month goes on secondment to take up a “senior role” in the European Banking Authority (EBA) – the new EU body for banking supervision.

He will be paid by the EBA but will remain a Central Bank staffer.

‘‘This secondment is in line with Central Bank strategy to support the new European Supervisory Authorities,” a spokeswoman said, before, one hopes, literally weeping with laughter.