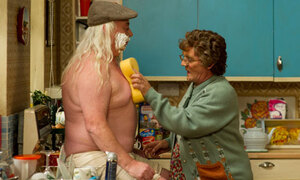 There’s always one Bafta nomination that makes you do a double take. This year it’s Mrs Brown’s Boys, which gets the nod in the sitcom category at the expense of shows such as Friday Night Dinner, Grandma’s House, the Inbetweeners, Him & Her, and, most notably, Miranda, which aren’t nominated. Perhaps the judges thought it was mandatory to include an actual joke in the comedy nominations. (See also: Come Fly With Me’s nomination in comedy programme). Fellow nominees Rev, The Trip and Peep Show must be hoping Mrs Brown’s Boys inclusion ups their chances of winning. Because let’s be honest, it definitely couldn’t beat them. Could it?