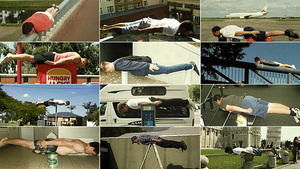 A man has died in Australia after taking part in the internet phenomenon of planking. But what is it and where did the craze come from?

The victim, a man in his 20s, fell from a balcony railing in Brisbane while a friend photographed him, according to police.

The phenomenon of planking involves lying face down in a public place – the stranger the better – and posting photos on social networking sites such as Facebook. Aficionados lie expressionless with a straight body, hands by their sides and toes pointing into the ground.