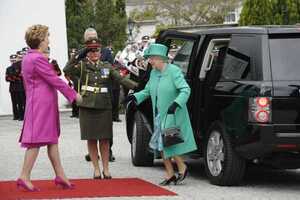 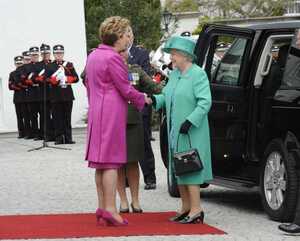 Body language expert Peter Collett, author of The Book of Tells, shares with the Guardian our relief that the President left her ‘nappy pat’ at home.

When the Irish president, Mary McAleese, shakes hands with people, she frequently uses her left hand to pat the other person’s hand during the handshake. This is a “nappy pat”, and I have seen her use it with the Russian president, Dmitry Medvedev, as well as with Pope Benedict XVI and Pope John Paul II. The nappy pat pretends to be affectionate and inclusive, but its real purpose is to remind the other person who is in charge.

McAleese was well drilled for the meeting, because when she greeted the Queen she managed to suppress her natural impulse to pat her on the hand. Instead, she dutifully extended her arm, grasped the Queen’s hand formally and welcomed her to Ireland. There was no bending of the knee or dipping of the head – nothing that might suggest an unequal relationship between the two countries.