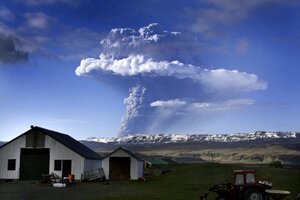 The island’s most active volcano, Grimsvotn, located at the heart of its biggest glacier Vatnajoekull, started to spew smoke and lava late on Saturday.

Within several hours, the plume of smoke had rose to an altitude of at least 10.5 miles (17km) – almost double the height of the nearby Eyjafjoell eruption just over a year ago which peaked at around 5.6 miles (9km).