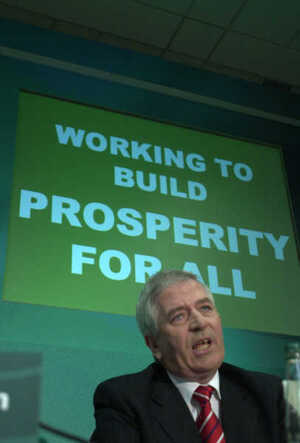 April 2, 2011 McCreevy Joins Two Company Boards
“The Ryanair director and former EU Commissioner Charlie McCreevy, has taken on two more non-executive director roles. Mr McCreevy has joined the board of Sports Direct, the UK’s largest sporting goods retailer which was founded by Newcastle United owner, Mike Ashley. A spokesman for BNY Mellon, the US financial services group, confirmed yesterday that Mr McCreevy is to join the board of one of its Irish-based entities, BNY Mellon Clearing International Ltd.” (Irish Times)

October 22, 2010 Senator Tied To Fingleton In €13.5m Deal That Went Sour
“Irish Nationwide had provided a loan of €1.6 million to former Fianna Fáil finance minister and European commissioner Charlie McCreevy in 2006 to buy a property at the K Club golf resort in Co Kildare. The loan was for more than 100 per cent of the property’s value at the time and was fast-tracked by the building society.” (Irish Times)

October 5, 2010 McCreevy Subject Of European Ethics Inquiry
“An ad hoc ethics committee in the European Commission is examining a directorship held by former commissioner Charlie McCreevy in a new firm which aims to capture a significant share of the British banking market.” (Irish Times)

September 24, 2010 McCreevy Payments From EU Defended
“The European Commission has defended the payment of large transition allowances to retired EU commissioners, Charlie McCreevy among them, even after they take up new jobs. (Irish Times)

June 17, 2010 McCreevy Has Not Read Bank Reports
Former Minister for finance Charlie McCreevy has not read the two reports on the causes of the banking crisis. He told reporters he has not yet read the banking reports but might do so over the summer. (Irish Times)

June 2, 2010 McCreevy’s €1.2m Golden Handshake
“Charlie McCreevy will get a golden handshake package worth more than €1.2 million when his term as Ireland’s representative on the European Commission ends in the new year.” (Examiner)

January 19, 2009 FitzGerald Says Crisis Started With McCreevy
“Former Taoiseach Garret FitzGerald has blamed Ireland’s dire economic state on a series of “calamitous” government policy errors.According to the former Taoiseach, the first mistake was committed between the years of 2000 and 2003 by then Finance Minister Charlie McCreevy when he boosted public spending by 48pc while cutting income tax.” (Irish Independent)