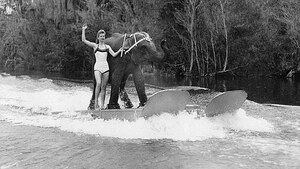 Queenie, who during the 1950s and 1960s became known as the ‘world’s only waterskiiing elephant’, has died.

Queenie was put down earlier this week at the age of 59 after her health deteriorated, according to the theme park in south Georgia where she spent her retirement from performing.

The elephant was just six months old when she was bought in a New York city pet store in 1953 by her former owner Liz Dane.

Soon after Dane began training Queenie to water ski at a Florida theme park, where the animal performed to music several times a day for 15 years. She also played the harmonica.

Junk In The Trunk

An Elephant In 17th Century Dublin