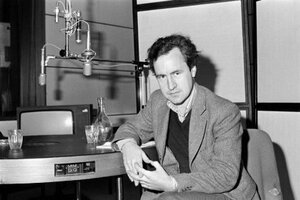 John Banville told Observer readers yesterday about his 1968 visit to an American girlfriend at Berkeley College in San Francisco, the then epicentre of radical politics and hippy ideals.

It was for the young Banville a time to briefly suspend his growing European cynicism with a little peace, love and psychedelics.

The weather, so seductive at first, did pall a little. There was the morning when I drew back the bedroom curtains on a flawlessly pellucid blue sky and exclaimed, as if I were Father Jack echoing Sarah Miles in White Mischief, “Another beautiful fecking day!” However, it did rain on the sad evening of my departure, a nice case of the pathetic fallacy showing itself to be not fallacious at all, as I and the sky wept quietly together.

Then there was the politics. I neither cared about nor believed in the revolution, lost as I was in single-minded, beady-eyed concentration on the self and its expansions. For a day or two, it is true, as I watched the unfolding événements in Paris on the CBS evening news, I wondered with some bemusement if De Gaulle might indeed be ousted by a bunch of rowdy students, in which case there was no telling where the thing would end. Of course, I had overestimated the commitment of French youth to liberté, fraternité, égalité, for within days, as it began to seem that their future in banking, business and bureaucracy might be put in jeopardy, the students quietly went home to the bourgeois comforts of the banlieues. Their counterparts in Berkeley, it was clear to see, would do likewise, when the fun wore off. And they did.

And that’s what happens when you take the brown acid.

Once Upon A Life: John Banville (Observer)