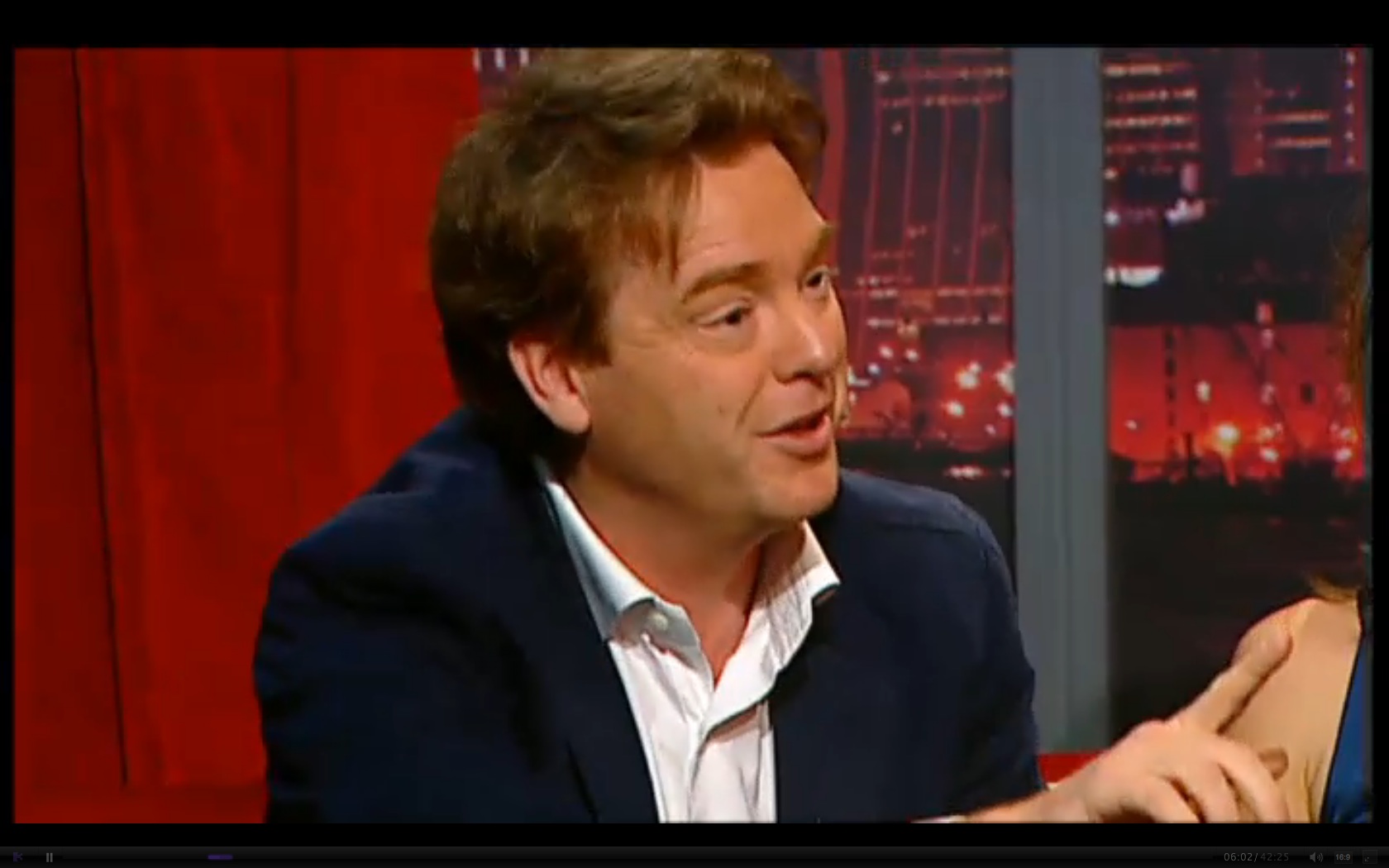 You may have missed last Friday’s Later on TV3 with Vincent Browne and an eclectic (and by eclectic we mean eclectically middle class and in media) panel consisting of David McDreamy, Margaret E Ward, Ulick O’Connor, Michael O’Doherty and novelist Sarah Harte.

Bulmers ad heart throb McDreamy ostensibly came on to promote the Dalkey Book Festival. He did not expect the Spanish inquisition…

Vincent Browne: “David, are you going to get into trouble over this Bulmers ad, are you?”

David McDreamy: “Not at all. Not at all. Sure why would you get into trouble over doing an ad?”

McDreamy: “Who would get into trouble for doing that?”

Browne: “We’ll see now. We’ll do our best to get you into trouble for it. There used to be a tradition in journalism that journalists didn’t do advertisements because it was regarded as compromising them in their role as journalists. Now you and several other people – well-known journalists and broadcasters – do advertisements and there’s no trouble at all about it and it seems to me rather odd.”

McDreamy: “What is the, eh… Let’s actually think logically about where you’re going with this. What is compromising about writing about economics and the macroeconomy in ireland, and informing people, let’s say about house prices, and the state of the banks and the state of the euro, and doing an ad which says that in a crisis you’ve actually got to do your bit. In a crisis you’ve actually got…”

Browne: “There was a rule against it. Remember there was an outfit – Ulick, you might remember – called the National Union of Journalists, remember that? And it had a rule against journalists doing advertisements and I think it was a good rule.”

McDreamy: “Vincent, why would you be having rules about people’s lives? What sort of behaviour is that? Seriously.”

O’Connor: “The civil service used to have it…. my own profession, barristers, used to have it. Do you know I was at the bar when you couldn’t have dinner with a solicitor in public? Because that was touting for business.”

O’Connor: “If you were in a restaurant with a solicitor you were ticked off by the Bar Council.”

Browne: “Anyway, why shouldn’t we have rules? The reason you have to have rules is to enforce some ethical standards in the profession of journalism.”

Browne: “I didn’t ask about credibility.”

McWilliams: “Listen. Listen to me. Listen to me. OK? It’s based on your ability to analyse and inform the public, and make people aware that the establishment in Ireland –”

Browne: “That’s not the point at all.”

Browne: “It’s not dealing with the issue at all>”

McDreamy: “So you think that my credibility as a journalist is compromised by the fact that I write books –”

Browne: “That you do ads on TV, yeah. There was a rule in journalism that journalists didn’t do that, didn’t involve themselves in advertising except for their own newspaper. But otherwise they didn’t do any promotion of any products for the reason that they were suppose to be independent of such interests. And once you involve journalists an being paid for by various companies and corporations, you begin to doubt the independence of journalists.”

Margaret E Ward: “I would think that David is an economist who writes.”

McDreamy: “Well that was exactly the point I was going to make.”

Ward: “So I don’t know if you can hold him to the standards that people who have trained as journalists and are members of the NUJ.”

Browne: “I think he calls himself a journalist.”

McDreamy: “Well not really, not really. I’ve always thought of myself as an economist first, who writes. I – Hold on.”

Browne: “ But you make most of your income, until recently anyway, from writing.”

McDreamy: “Most of my income came from writing books, not journalism, from books; from making documentaries; from making programmes like yourself, being a presenter; and doing theatre, and doing a one-man show; from giving public speeches on economics to experts. That’s where my income comes from. So the idea that… See, what I like about this… You’re trying to pigeonhole me into the ethics or the rules of journalism. That suits your agenda but the point is…”

Browne: “Don’t mind my agenda… It’s a simple question. Is it ethical for people who are going before the public and pretending to be independent of corporate interests, to be aligning themselves with a corporate interest?”

McWilliams: “You had a magazine, the Village. Every time you got advertising or the Village, did you feel compromised?”

McWilliams: “Why not? Because you were selling a product. Somebody else’s product in your magazine.”

Browne: “Because in no stage was there any crossover between the advertising and the editorial.”

Browne: “It had nothing to do with me.”

McDreamy: “On the contrary, Vincent, you were giving them credibility.”

McDreamy: “My point is you are always going to have corporate issues around -”

Michael O’Doherty: “Advertising in a magazine is completely different from you going onto a television advertisement and being the face of a product.”