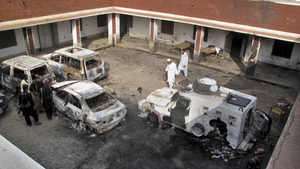 An 8-year-old Afghan girl was murdered yesterday when she was unwittingly forced to carry a bomb. The New York Times reports that Taliban insurgents in Kabul tricked the girl into carrying a package wrapped in cloth. When she was close to a police vehicle, they detonated the bomb remotely. Only the girl was killed, and the local police chief says her body was “taken to a nearby security check post, and the police called her relatives.”