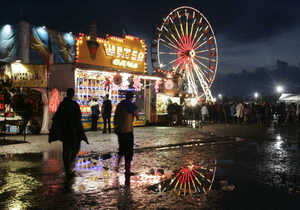 The fairground at Oxegen last night

Four men from Northern Ireland have suffered slash wounds in a row at the Oxegen music festival at Punchestown Racecourse in County Kildare.

The incident happened shortly after 0400 BST in the Blue  campsite at the event. Four men, who are all in the late teens, had their injuries treated at the site,Another man, aged 19, has been taken to Tallaght General Hospital.