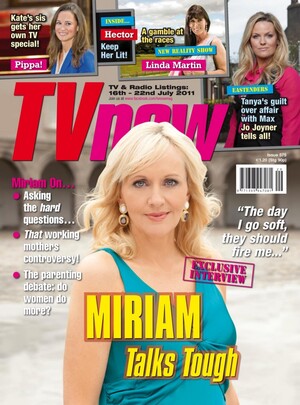 Miriam O’Callaghan sat down with TV Now this week in part, to clear the air over her views about working mothers, telling the magazine’s Ray Walsh:

But then interviewer Walsh, a father of two, pressed Miriam on the dad’s role in all this child-rearing palava.

“Men don’t necessarily feel the same guilt, and society as a whole doesn’t make them feel guilty, for not staying at home with their children. That’s just a fact of life. I know there are men who stay at home and look after their children. But society still tries to divide women into those that opt to stay at home – which is the hardest job – and those that go out of the home to work. And I don’t like that, I think that whatever we’re doing we’re working harder than the guys anyway. You don’t multitask as well as women!”

Now she’s just goading me, surely, but I’m not going to engage! “I don’t know,” she continues, “I’m not sure how many men are thinking, who’s collecting the kids from school today. Maybe I’m wrong about that.”

I try to politely suggest that maybe if men were more included in the parenting debate, rather than it being assumed that they don’t want to take part, things might start to move on.

“Society does need to change, start talking about parenting and take the onus off women as well,” she agrees.