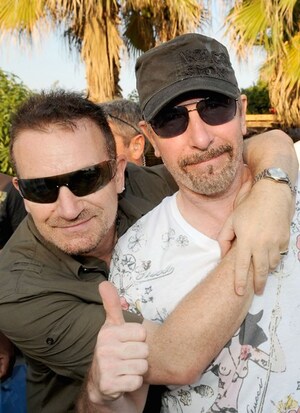 [Maryland Democratic] Sen. Benjamin Cardin’s recent letter defending Bono and his ONE foundation puts him in direct opposition to President Obama’s appeal for “corporate jet” owners to pay their fair share of tax (“Cardin: ONE Campaign works,” June 27). U2 are major tax evaders. I am also perturbed by Senator Cardin’s statement that Bono and the ONE campaign exercised significant influence on framing legislation in the financial services bill.

Paul Hewson, aka Bono, exemplifies the worst characteristics of Wall Street, both for excess and tax evasion. He is the major financier of Spiderman, the most expensive and lavish show ever staged on Broadway. His hotel in Ireland, the Clarence, is undergoing renovations to make it the most exclusive hotel in Dublin. He set up and has a large stake in Elevation, a private equity fund whose first act was to buy a controlling share of Forbes magazine, which celebrates wealth and over-consumption. U2 has a private jet, and Bono has a half share in a $15 million yacht, a mansion in Dublin, a house on the French Riviera and an A-list apartment in Manhattan.

Ireland created a tax exemption in the early 1980’s to help artists make a modest living in a small country. U2 used and abused this exemption to amass hundreds of millions of dollars, tax free. When the Irish government put a cap on the tax exemption on royalties in 2006, U2 promptly moved that portion of their business to a Dutch tax haven. So while Bono was getting access to many of the world leaders to pressure them to double their aid budget to 0.7 percent of GDP, he himself was not even paying basic taxes. He wants ordinary people like me to pay for the causes he berates world leaders for not embracing.

Ireland is now bankrupt, and there have been calls from some government ministers for Bono to pay his taxes so the country can keep hospitals and schools open. Those appeals have fallen on deaf ears, despite the fact that Bono and U2 have extensively traded on being Irish to engender fan loyalty.

While the myriad of causes Bono has taken up may seem contradictory, they are actually consistent. They all serve the purpose of either promoting U2 or giving Bono access to power at the nexus of celebrity and politics, usually both. The recent appointment of Michael Elliott as CEO of ONE demonstrates the point: He is not a poverty advocate, he has been a senior editor at Time magazine since 2001. Time named Bono its Man of the Year, gave the band tremendous coverage and even let Bono write editorial articles.

As a federal worker awaiting the outcome of the debt ceiling talks to see where I will endure cuts and taxes, I am not amused by Senator Cardin’s endorsement of Bono and ONE. As a registered Democrat and someone who voted for him, I expect him to condemn Bono’s tax evasion and refuse to work with the ONE campaign any longer.

The recent letter to the editor entitled, “Senator Cardin’s affection for Bono’s foundation is indefensible,” (July 7) by Simon Moroney contains so many inaccuracies that it is pointless to attempt to correct them all. But the most serious inaccuracy is the totally false and possibly libelous accusation that U2 and Bono have, by moving a part of their business activities to Holland, been involved in tax evasion.
Contrary to what Mr. Moroney writes, Ireland is, thankfully, not bankrupt. For the record U2 and the individual band members have a totally clean record with ever with every jurisdiction to which they are required to pay tax and have never been and will never be involved in tax evasion. Had he bothered to contact the Irish Ministry of Finance, as did Spin magazine journalist Steve Kandrell for his March 25th 2009 feature on U2, he would have discovered that they have no problem with U2 basing some of their business activities in Holland. “People complained at the time,” says Owen Durgan of the Ministry of Finance. “But we have companies moving here from the rest of the EU, so it all evens out. We wouldn’t make an issue of it.”

Furthermore, since he is a federal worker, it might interest Mr. Moroney to know that U2 and its members have paid many, many millions of dollars in taxes to the United States Internal Revenue Service over the years. I hope that his fears of an Obama tax increase affecting him personally turn out to be as unfounded as his statements about U2’s tax affairs and Bono’s ONE campaign.