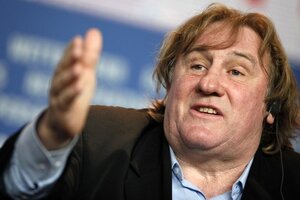 Friends of the actor said he was “completely sober” [on the Paris-Dublin flight] but desperate to relieve himself. At first he was told he had 15 minutes to wait, but then due to congestion on the runway, he was informed he would have to endure another 20 minutes, they said.

Given his “irrepressible need”, his two travel companions, including the French actor Edouard Baer, offered him an empty bottle as a last resort.

They said he had no choice but to use it, but that he did it “without any provocation and after making sure he wasn’t seen”.

A little urine was spilt on the floor, which the actor offered to clean up himself, saying he was “sorry” for the inconvenience caused, they said.

Depardieu ‘Sorry’ To Have Urinated On Plane’s Carpet (Telegraph)