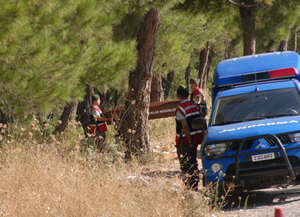 A 17-year-old waiter in Turkey’s Aegean province of İzmir has been detained for allegedly stabbing to death two women from Northern Ireland.

The bodies of the two women, identified only as E.G. and C.D., have been recovered from a wooded area outside central İzmir.

The suspect, identified only as R.Ç., was said to be the boyfriend of E.G.’s 15-year-old daughter S.G.

R.Ç. first denied any connection to the women but upon detailed investigation by the local police, confessed to murdering them, saying he murdered E.G. because she would not approve of his wish to marry her daughter.

R.Ç. said he met S.G. in Kuşadası, a tourist destination close to İzmir, when she and her family came to the restaurant he was working at as a waiter and they started dating.

On the day of the murder, S.G. was on a boat tour in Kuşadası and R.Ç. offered to take E.G. and C.D. to İzmir for a tour of the city’s sights.

They went to the city by taxi, and once in İzmir R.Ç. picked up his father’s car and took the two women to the woods, where he stabbed them to death. R.Ç. left the bodies in the woods and returned to Kuşadası.

S.G., suspicious of the disappearance of her mother, contacted local authorities, which led to the opening of an investigation and R.Ç.’s apprehension.

R.Ç.’s father E.Ç. and taxi driver M.K. have also been detained as suspects in the investigation.

Reports did not mention whether the two women were residents or tourists, though reports have said that E.G.’s family does own property in the Kuşadası area.