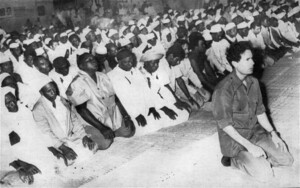 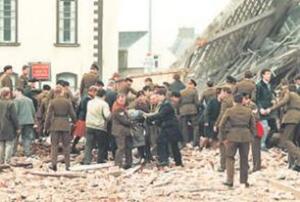 Earlier this year Martin McGuinness told the the BBC’s Political Editor Mark Devenport that he felt no shame about republicans’ past links with Colonel Gaddafi.

In the report, Mark Devenport asks exactly what was the link between Colonel Gaddafi and Northern Ireland?

Recalling that in the 1960s the Provisional IRA was badly armed, relying on old weapons, some dating back to World War II, McGuinness says Gaddafi saw the IRA as a comrade-in-arms fighting British imperialism.

The first proven connection with Libya was discovered in 1973 when the Irish Navy boarded a ship called the Claudia, off the Irish coast. They found five tonnes of weaponry supplied by Libya.

Links between Gaddafi and the IRA re-emerged in 1986 after Gaddafi’s adopted daughter was killed along with more than 100 other people by US bombing raids launched from UK bases.

The Libyan leader has said he resumed contact with the IRA in the aftermath of those air raids.

A  year later, French authorities stopped a ship, the Eksund, which was on its way to Northern Ireland carrying around 1,000 AK-47 machine guns, more than 50 ground-to-air missiles and two tonnes of Semtex. It is believed that other shipments of arms reached Ireland before the Eskund was apprehended.

In 2003, the BBC spoke to an intelligence source who said there was no question that Libyan arms had greatly enhanced the IRA’s deadliness.

Attacks carried out with Libyan Semtex included the Enniskillen ( Remembrance Day) bombing  in 1987 (above), the Ballygawley bus bombing in 1988 and about 250 other booby-trap bombings.

A legal fight to secure compensation from Tripoli for victims of IRA atrocities were believed to be close to a conclusion last year, with as much as £2 billion lined up as the price for Libya’s role in the Troubles.