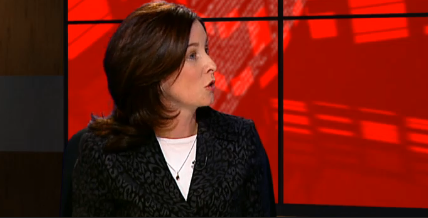 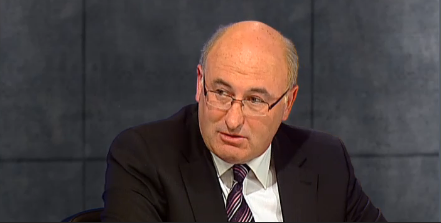 Journalist Sarah Carey took her turn as guest host of Tonight With Vincent Browne last night. Her main panellist was Environment Minister Phil Hogan, on to defend the household charge.

Phil is a friend of Sarah’s and he has known her family (her dad was an FG councillor) since before Sarah was born.

Sarah was, as a marketing executive with Esat in the mid-1990s, the fund-raising conduit between Phil, then chairman of the Fine Gael Parliamentary Party, and her boss Denis O’Brien. She introduced the pair and facilitated at least one secret donation between Esat and Fine Gael prior to the awarding of the second mobile phone licence in 1997. This introduction [to Esat] led to Phil appearing as a witness at the Moriarty Tribunal, where he denied meeting Denis O’Brien at a lunch in Lloyd’s Brasserie in October 1995 – evidence that was directly contradicted by FG colleague Mark Fitzgerald. Fitzgerald claimed not only that O’Brien was present, but that the businessman asked about the second mobile phone competition In front of Hogan at that meeting.

When the Moriarty report was published in March, Sarah appeared on Prime Time to defend Denis O’Brien (and to explain why she had misled the tribunal about the leaking of details of a donation from Esat to the PDs).

Host Miriam O’Callaghan asked her about her connection with Phil.

Miriam O’Callaghan: “One last question about yourself: the report also found that you used your Fine Gael connections to put you at the centre of a number of substantial donations of cash from Denis O’Brien to Fine Gael, and in particular it quotes one letter from you to Phil Hogan, and I’m just, it’s, very briefly because I think it says a lot about connections. It goes: ‘Dear Phil, please find enclosed a draft for the golf on the 16th’ – this is to be a Fine Gael fundraiser – ‘I understand Denis O’Brien has requested that there are no references to be made to his contribution at the event. Best of luck on the day’. Doesn’t that just say to people watching Sarah Carey, powerful people buying influence?”

Sarah Carey: [laughs] “OK. Look. We’re talking about a golf fundraiser and there was a donation of a few thousand pounds to it. These kind of things were run of the mill for all political parties and Denis O’Brien was making donations to all political parties – Fianna Fáil, the PDs, Fine Gael, everybody. You know. It’s really peripheral to the main issue.”

Such retina-scorching insouciance did not go unpunished, however, and she was let go two days later as a columnist with the Irish Times.

Sarah’s Facebook status, within hours of her removal, read: “The cross-eyed cow [Kennedy suffers from an eye condition] can stick her column up her arse. I am moving on.”

But people like Sarah don’t really move on and, judging from last night’s appearance, she has lost none of her smugness, self-regard or sneering contempt for people on the margins. And she remains well-connected.