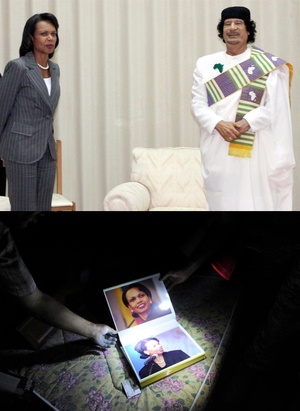 As Gaddafi’s Tripoli compound is ransacked, certain items of interest have come to light. There’s his daughter’s golden mermaid couch, for example. And then there’s the photo album filled with pix of Condoleezza Rice.

In a 2007 interview with al-Jazeera television, Gadhafi spoke of Rice in glowing terms. “I support my darling black African woman,” he said. “I admire and am very proud of the way she leans back and gives orders to the Arab leaders … Leezza, Leezza, Leezza. … I love her very much. I admire her and I’m proud of her because she’s a black woman of African origin.”

In the ruins of Gadhafi’s lair, rebels find album filled with photos of his ‘darling’ Condoleezza Rice (Photoblog)

Confessions of The Dublin-Born “Best Sniper In The World”