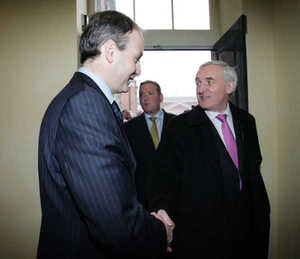 Asked by presenter Ivan Yates on Newstalk’s Breakfast Show  today what he thought of Mr Ahern’s expenses claim, Mr Martin said he thought it was too high. “I think it should be reduced,” he said.

Michael Martin literally didn’t give a rat’s ass about Bertie’s divilment while he served under him in cabinet. So, what could possibly have changed?

The party leader also criticised Mr Ahern for comments he made about the party’s cumainn on a documentary on the history of Fianna Fail, due to be broadcast on TV3 next week.

“I’m really appalled at that,” Mr Martin said, having heard the comments. He described it as an “unbridled attack on grassroots members” and “very unfair”.

Those strange Fianna Fail values we’ve missed so much.

Protect the ‘party’. Never the people. Grass up your mates. And fill yer boots.