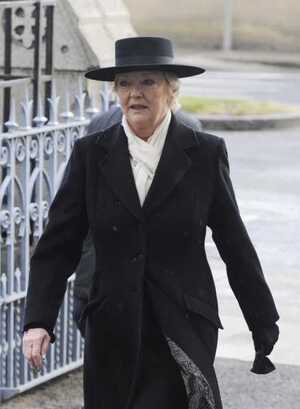 Senator Ronán Mullen went on Marian Finucane’s RTE R1 show yesterday seeking to promote the Vatican’s response to Cloyne and criticise Enda Kenny “scattergun approach” in his speech to the Dáil in July.

The just-back-from-her-holidays-host did not oblige.

Senator Ronan Mullen: “If you take a scattergun approach, if you try and character-assassinate just because you know…”

Mullen: “No let me make the point”

Finucane: “No, excuse me. Talking about character assassination in the context of what the church presided over in this country in terms of..”

Finucane: “Sorry, EXCUSE ME. I’m putting the point that has come up over and over and over again on this programme and other programmes – and led to Cloyne, led to Yvonne Murphy, led to Elliott, led to all of those things. Let us not forget. Talking about character assassination in the terms of the church…”

Mullen: “Marian would you “

Finucane: “You are taking it out of context.”

Mullen: “Marian you are, what you are doing is, you are ratcheting up the outrage here.”

Mullen: “And you are preventing”

Finucane: “I’m going back to history.”

Mullen: “Marian you are preventing us from distinguishing between what has to be condemned outright and in forthright terms, and what ought not to have been said, and my point to you is simply this: There is nothing, and there was nothing, in Enda Kenny’s speech, that acknowledged that over the last ten years Ratzinger in particular had led a reform about how these issues were handled But what you did get was a direct allegation of elitism and all these kinds of words. There was no evidence provided in the speech…. This is why it’s important and this is why I think maybe unconsciously you’ve a bit of an agenda here.”

Finucane: “I most certainly do not.”

Mullen: “I think you have.”

Finucane: “But I will put it to you very bluntly. If you want to know about an agenda. I do have an agenda, actually, about protecting young children, and not doing cover-ups.”

Mullen: “And we all do Marian.”

Finucane: “And you call that an agenda.”

Mullen: “Well no I’ll tell you what I call an agenda. It it is, it is a failure to look at the precise meaning of words and it is a failure to accept that sometimes innocent people get slated along with the guilty… Can I just make this closing point?”

Finucane: “Alright, no, you’ve made a lot of points.”

Mullen: “Will you indulge me on this one?”

Mullen: “You see you’re annoyed with me now.”

Finucane: “No. sorry. Excuse me. I get annoyed with people all of the time, about all sorts of things, but I also try and give a fair track to other people on the programme.”