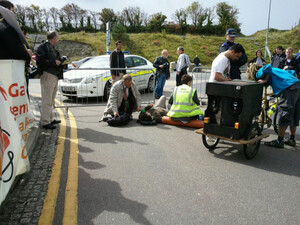 Two students have blocked part of the roadway into the hotel by lying on the road with their arms chained together.

They say they have been forced to take such radical action because they’re not being listened to by the Government.

Student Senan McGee said he wants the Government to pay attention to their concerns.