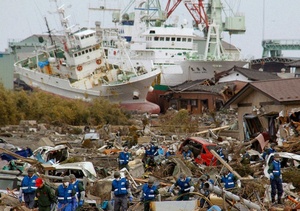 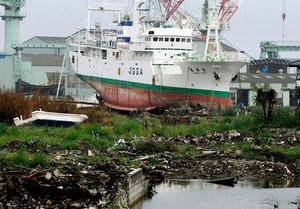 As the world commemorated the 10th anniversary of the 9/11 attacks on the United States, Sunday had another significance for Japan. It marked six months since the massive earthquake and tsunami on March 11, a date now seared in the country’s national consciousness. At 2:46 that afternoon, a 9.0 magnitude earthquake struck Japan offshore, triggering a tsunami wave of up to 10 meters (33 ft) that engulfed large parts of northeastern Japan and also damaged the Fukushima nuclear plant, causing the worst nuclear crisis in decades. The current number of dead and missing is estimated to be 22,900.

ABOVE: A view of Higashi-Matsushima, Miyagi prefecture, after the massive earthquake, tsunami, and the aftermath taken by Kyodo on March 14, 2011, (before), and September 1, 2011