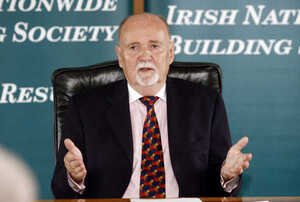 He even got to keep the watch.

An employment appeals tribunal today hinted at a possible reason.

She told the tribunal that there were different lending rules for different sets of borrowers.

There was certain criteria for the general public, and a different set of criteria for people in certain social circles – including members of the government, media and close friends.

Ms Greene alleged that he would give those people what they wanted.

Asked whether there were any rules for the repayment of loans, Ms Greene said Irish Nationwide carried out its business as a personal bank for Mr Fingleton, and that he had made all decisions.

She said he made up his own rules as he went along.

She said clients in his social circle got special treatment that maybe no-one else would know about.

Members of the government? Media? Really?

Sadly, Mr Fingleton is currently out of the country.

The tribunal’s chairman said Mr Fingleton had said he was not available to attend today’s resumed hearing as he was “in court in another country”.