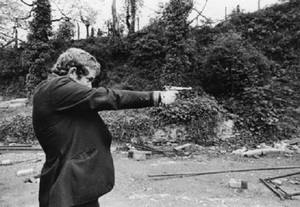 He has won plaudits for his conciliatory role atop the 4-year-old coalition government in Northern Ireland, a British territory that the IRA long sought to overthrow by force. Power-sharing between Northern Ireland’s British Protestant majority and Irish Catholic minority was underpinned by the IRA’s 2005 decisions to disarm and renounce violence.

But McGuinness also has never come clean about his role directing an IRA campaign that killed nearly 1,800 people and maimed thousands more. At times he has flatly denied IRA membership, while in 2003 he testified to a British fact-finding tribunal that he quit the IRA in the early 1970s, a claim widely dismissed as implausible.

McGuinness took part in secret 1972 negotiations between IRA commanders and the British government. The following year he was arrested in the Republic of Ireland in a car containing explosives and ammunition and convicted of IRA membership. He declared from the dock that he was proud to be an IRA member.

Independent historians of the Sinn Fein-IRA movement say McGuinness served on the IRA’s senior command from around 1975 to 2005, when the IRA declared it was going out of business. Several IRA splinter groups continue to plot bomb and gun attacks and denounce McGuinness as a traitor to their cause.