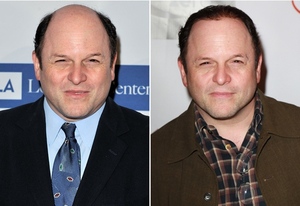 The internets have been asking many questions lately about Jason Alexander’s recently unveiled new head. Clearly, it’s a syrup. But why the receding look?

The reason it looks thin is that I challenged my designer to make me a piece that would look very similar to the way I did 10 years ago. So, it looks like a guy who is losing his hair and isn’t an artificial mop of hair that I never had. The designer was dubious at first but he actually loves the look now. And the fact is that we are still playing around with the shape and density to make it as flattering and natural looking as we can.