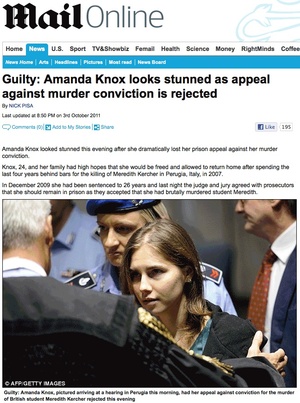 Following yesterday’s acquittal of Amanda Knox, the Mail ( which had pre-prepared an ‘A’ and ‘B’ news story depending on the outcome) published the wrong one – thereby exposing the soiled knickers of speculative journalism.

The headline referring to Amanda Knox’s ‘stunned’ look at having her appeal rejected (in the parallel universe of the B-article) is one thing. Slightly more uncomfortable are later descriptions of ‘events’ and ‘quotes’ from Knox and Sollecito which clearly never happened, as the appeal was successful. 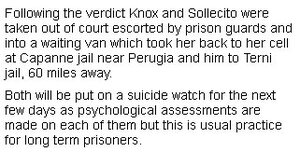 Screengrab of the entire ‘B’-article here