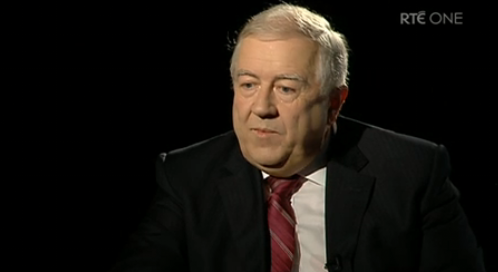 Former National Treasury Management Agency (NTMA) boss Michael Somers received €1million in 2008 – earning him the title, The Million Euro Civil Servant. He retired in 2009 after 48 years in the public service, including 20 years managing Ireland’s debt with the NTMA.

Aine Lawlor talked to him on the RTE series One to One on Monday. It was a fascinating interview and, we thought, may help illuminate your path through what exactly happened here.

The lucid recollections of a sane man in a world gone mad or more self-serving hogwash?

Aine Lawlor: “I want to begin by reading you a quote, a description of you which, don’t look so nervous. It comes from Shane Ross’s book The Bankers. And he says: “Somers is one of the few non-elected public servants with a media profile. Successive ministers for finance have eaten out of his hands.’ Is that a description you recognise?”

Michael Somers: “Not really no, but eh, I mean I know Shane reasonably well. I suppose we never really hired PR people so I got to know an awful lot of journalists because I did most of the interviewing myself.  So to that extent he may have had a somewhat elevated notion of the influence that I had.”
Lawlor: “It’s a great image though – all those ministers for finance eating out of your hand?”
Somers: “Well I’m not sure that any of them would recognise it either. Depending on the minister, I had varying relationships with different ministers. Some I got on well with, others less well with. So it was a mixed bag.”
Lawlor: “But always a singular relationship, compared with the relationship of most civil servants with their political masters. You were always known to have a very direct relationship with the top table.
[Later]

Lawlor: “You’re known as the one million euro civil servant.

Lawlor: “And your salary was kept secret for years. And one of your big things was being able to hire and fire and being able to offer the right money to the right person for the right job. You’ve always defended your salary. It’s a source though of massive anger to many of the public. That so many of the people at the top of society got great salaries, great pensions and they’re so broke now.”
Somers: “Well what I’d say to that, in that regard, is I kept the country running and solvent for the 19 years I ran the NTMA. We went through crisis after crisis but there was never a question of the State not being able to be funded or paying massive rates of interest or anything like that.”
We ran it well, we ran it with a small number of people and we took on all kinds of activities that the State wanted us to take on like the State Claims Agency, the Pension Fund and the National Development Finance Agency. And the pay rates, I mean the way pay, I didn’t set my own pay by the way.
The pay rates were set by outside advisers who evaluated the jobs that we were doing. And I had to hire people in from the private sector and most of these people were already in good jobs because, if they weren’t in good jobs, I didn’t want to know them…
But I was in the ha’penny place compared to what some others were pulling in. Now with the benefit of hindsight of course it looks as though we were overpaid. We were actually, as people used to say, we were correctly paid by reference to the times that were in it. And my pay, it was gone over by so many people and it was eventually signed off personally, every year, by the minister for finance.
And if they didn’t want we, they didn’t have to have me. I mean I had plenty of other job offers and I could have gone off to. As indeed could have the others that were working for me.
[Later]

Lawlor: “…you had a good relationship with Charlie McCreevy?

Somers: “Well, first of all, I think it’s crazy to make decisions in the middle of the night, or early in the morning. People are not at their best and you should really sleep on anything. I don’t know how the crisis suddenly blew up, just like that – to the extent that everything that moved or didn’t move had to be guaranteed. I mean there was no case for guaranteeing bonds, etc. If there’s a run on a bank, you will have to guarantee the deposits because otherwise the thing would just spin out of control. Now I was in no position to determine whether there was a run on Anglo that was going to spin out of control the following morning.  I’m not sure there was any necessary run on any of the other institutions. So why the blanket thing was given, I don’t know. And why it was given at 2 or 3 in the morning, I don’t know.

Lawlor: “It sounds as though you should have been in that room.”