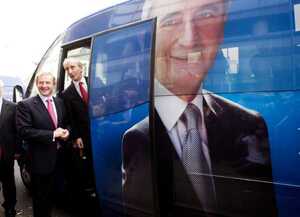 Shane Coleman: “Your candidate for the presidential contest has, what, 9% in today’s Irish Times poll. Second last place. What is happening to the Fine Gael campaign?”
Regina Doherty: “Well if I’m to be really honest, I am obviously disappointed, as are a lot of people in Fine Gael but then you have to look at the  positives in this. We only launched our campaign a few days ago.”
Coleman: “Is there any positives?”
Doherty: “Well there are always positives. You know, it depends. Is your glass half full, or half empty? We only launched our campaign.”
Coleman: “Hang on, the glass is nine-tenths empty…isn’t it?”
Doherty: “No.”
Coleman: “Sorry, go on.”
Doherty: “No, we only launched our campaign on Monday. We had an incredible turnout on Monday from the parliamentary party who are now completely behind, not only the campaign, but also our candidate.”
Coleman: “Were they not previously?”
Doherty: “Well there was..some people I suppose maybe who lacked lustre I suppose is probably the nicest way to put it. And it’s not .That had nothing to do with our candidate, who I think is superb. And I genuinely think he’s superb. And I think people were just busy and they had their own agenda going on. We’ve..”
Ivan Yates (interrupting): “Hold on, hold on, I just can’t have this at all. You have a poll today that shows four out of five Fine Gael supporters are not supporting Gay Mitchell.  What happened was the Fine Gael hierarchy came with two credible candidates – Mairead McGuinness, but definitely Pat Cox brought something different. And the fact of the matter is Gay Mitchell was a career politician, totally unsuited to this, lacking in charisma, Dublin-centric. And the parliamentary party, in the most arrogant way, turned around and decided ‘well, actually, it’s your loyalty to Fine Gael is going to be the most important criteria. It’s your commitment to the party’. Like, what sense of entitlement of a planet were Fine Gael living on that they didn’t turn around and say ‘well look, what do the public want here? Do we have any private poll data?’ They did have private poll data – showing that Gay Mitchell was not saleable in this particular context. Like, surely, the electoral college in Fine Gael and the parliamentary party, in particular, made a proper hames of this.”
John Drennan: “Cor blimey, he sounds like Dunphy this morning.”
Yates: “It’s true. It’s true. If I was in Fine Gael I’d be shocked at the just pathetic performance of the parliamentary party, who wanted to send a message to the leadership that they chose the wrong candidate.”
Listen here
Sponsored Link