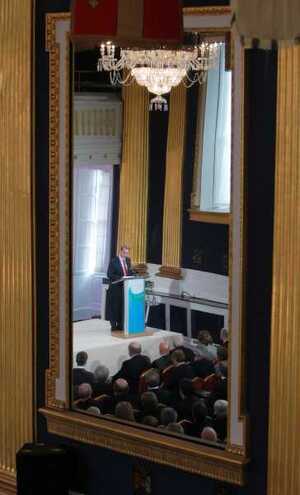 “One of the attendees, Peter Sutherland, the chairman of Goldman Sachs International, a company investigated for fraud (it denied the accusations), tells Irish citizens we must suffer more austerity (in addition to the €64 billion burden of recapitalising the banks) to save the European Union.

Denis O’Brien, a former deputy governor of Bank of Ireland, and Dermot Desmond, a businessman, are also due to attend.

Neither man is resident in Ireland for tax purposes and both have been criticised in state inquiry reports over their business dealings. Paul McGuinness, another attendee, manages U2, a band of corporate tax refugees.

How many of those invited to the forum would even understand the public anger at AIB’s attempt to have the €500,000 salary cap lifted for its incoming chief executive? During the election campaign,

Enda Kenny waxed incessantly about entering into a covenant with the people to make Ireland fair. At the forum next weekend, delegates will discuss the banking crisis and how to avoid the mistakes of the past. The mere composition of the forum makes it clear that we are already repeating our mistakes. Here we go again, settling for an economy at the expense of society.”