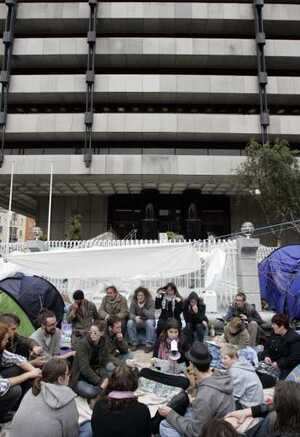 Economist Paul Krugman on the press and public reaction to Occupy Wall Street, the precursor to the Dame Street protests (above):

“The way to understand all of this is to realize that it’s part of a broader syndrome, in which wealthy Americans who benefit hugely from a system rigged in their favor react with hysteria to anyone who points out just how rigged the system is…

“What’s going on here? The answer, surely, is that Wall Street’s Masters of the Universe realize, deep down, how morally indefensible their position is. They’re not John Galt; they’re not even Steve Jobs. They’re people who got rich by peddling complex financial schemes that, far from delivering clear benefits to the American people, helped push us into a crisis whose aftereffects continue to blight the lives of tens of millions of their fellow citizens.

Yet they have paid no price. Their institutions were bailed out by taxpayers, with few strings attached. They continue to benefit from explicit and implicit federal guarantees — basically, they’re still in a game of heads they win, tails taxpayers lose. And they benefit from tax loopholes that in many cases have people with multimillion-dollar incomes paying lower rates than middle-class families.

This special treatment can’t bear close scrutiny — and therefore, as they see it, there must be no close scrutiny. Anyone who points out the obvious, no matter how calmly and moderately, must be demonized and driven from the stage.”