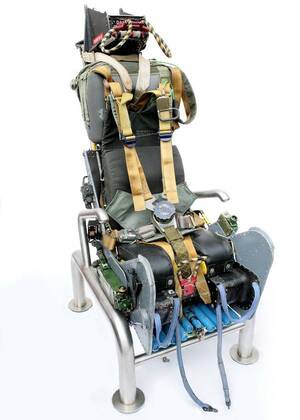 A decommissioned Martin Baker Mk6 ejector seat, originally used in a Royal Navy Buccaneer – now fitted with a stainless steel frame and for sale as an office chair – complete with original ‘chutes, harness and eject handles.

The Mk.6MSB was fitted to the Buccaneer jet used by both RAF and Royal Navy. This seat in particular was fitted to XV157 which flew first with the Royal Navy from ’66, including operating from the aircraft carrier HMS Eagle (where its was coded 107/E) and RAF squadrons from ’69. XV157 was sadly scrapped in ’91, at which point this seat was removed and converted to a training seat.

The ejector seat has been kept in its original authentic condition to preserve its’ history; parts are original to the chair, including straps, parachute, seat cushion and handles. Paintwork has been kept as the original. Rockets are present – including pitch rockets – minus cartridge and propellant.

By the look of it, you might have to sacrifice comfort for awesomeness but you can make an offer here, if you’re so inclined. You can bet it’s not cheap.

Sit Your Ass Down

Junk In The Trunk

The Bastard Chairs Of China