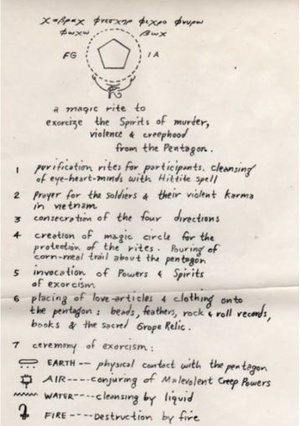 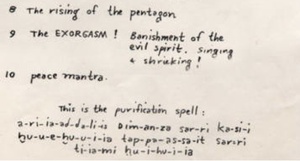 This Friday is the 44th anniversary of the day when 70,000  demonstrators gathered at the Lincoln Memorial in Washington DC to protest the Vietnam war.

Later that day, 50,000 marched to the Pentagon, among them legendary counterculture vibesters Abbie Hoffman, Allen Ginsberg and The Fugs, who hadn’t simply come to protest the war. They had come to exorcise (exorgasm) the Pentagon, then levitate it using a magical incantation prepared by the Fugs’ Ed Sanders.

The levitation may not have happened, but some who were there apparently witnessed the building ‘shudder a bit’.

They were, of course, very high indeed.

Here’s rare 16mm footage of the day shot by Edward Folger who describes it as an “impressionistic immersion in the experience of the march.”

44th Anniversary Of The Exorcism Of The Pentagon (Dangerous Minds)