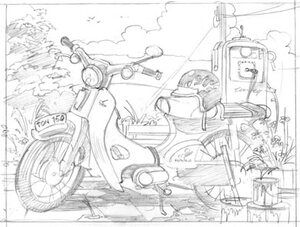 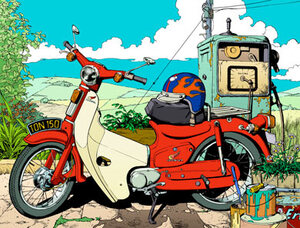 Eoin Coveney was recently approached by Sony Ireland to produce an illustration to accompany the new single by Christy Moore – “My little Honda 50″.

“…Once the concept and rough had been okayed by the Client, it was time to figure out how it might work in time lapse. I decided to break it down into 3 parts – first, to draw a rough pencil, then a scanned and printed version of the finished pencil was inked over. Finally, a scan of the finished ink was printed onto bristol board which I then coloured in real-time.The great guys behind the filming and editing them blended the 3 versions seamlessly into the finshed video.”