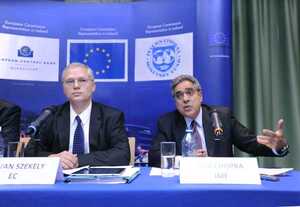 Apart from the bondholders.

The Republic of Ireland’s bail-out bosses have warned everyone must take their share of pain if the country is to make a recovery.

In their latest progress report, the EU, IMF and ECB troika shone the spotlight on the “sheltered” legal, medical and pharmacy industries for still being too expensive.

They also warned about a “lost generation” in youth unemployment unless the Government and the international bodies put heads together to create jobs.

Istvan Szekely (left, with IMF Europe Director Ajai Chopra), EC director of economic and financial affairs, said: “We have to be honest – Ireland is not yet out of the woods.”

But he said real progress was being made and all targets under the rescue deal had been met.

However, a lot of sacrifice from everybody in Ireland was needed to remain on track to pull itself out of the economic crisis, he added.

Mr Szekely said exports and manufacturing were performing “outstandingly” well and driving growth but he insisted medical, pharmacy and legal services needed to slash their prices.