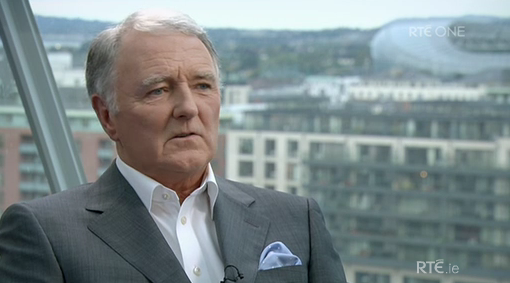 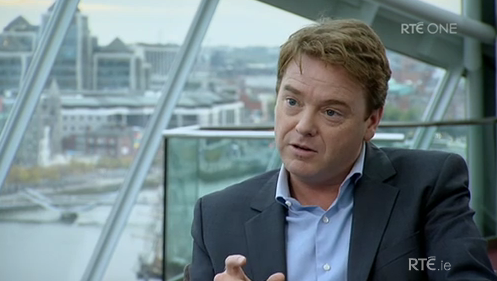 Mike Murphy Met David McDreamy last night for RTE’s The Big Interview. But it wasn’t the chummy encounter you might have expected, particularly when they talked about the fall-out from the property collapse.

You see Murphy was, until March of this year, a director of Harcourt Developments, a company that has a large proportion of its existing loan facilities with the National Asset Management Agency (NAMA).

Mike Murphy: “I’m going to ask you to do a thumbnail sketch of what actually happened.”
David McWilliams: “We misdiagnosed an overdraft as an economic miracle. All it was was an overdraft. The Irish banks borrowed from German banks and French banks. They lent money out, they looked like geniuses at the time. They lent money to property. And then when the Germans came and looked for their money back, we didn’t have it. The Germans panicked and then every other creditor panicked.”
Murphy: “I’m very interested that you did not refer to outside forces such as the collapse of Lehman Brothers, the American economy going into freefall, all of that kind of stuff. Because the principal politicians involved at the time I mean Bertie, Brian Cowen, all of them, they…it’s a mantra of their’s – ‘It was the world economy collapsing, that’s what happened to us’.”
McWilliams: “Ireland allowed its banks to borrow not a little bit more than they already had. Think about it. The Irish banks ran out of our savings in 2004. And from 2004 to 2008 they borrowed money from Germany, in the main, in order to keep the property market going. Now what we were they doing? They were lending to developers to, let’s say, develop a big site across the road. They knew the only way the developer could get out was if they could also lend to the little guys to buy the inflated property, in order for the developer to make his profit. And once the developer made his profit, they moved on to the next one, so the banks were at the epicentre of the largest financial scam ever perpetrated on the Irish people.
Murphy: “The developers always felt, David, that if the bank is going to give me this, any entrepreneur will feel that if the bank is going to shovel money at me like that I’m going to take it, like a shot. But, if they think I’m going to make my first responsibility paying them back they’re very much mistaken. We’re in business together. If I work, if I work, they work, if I fail, they fail too. That’s how the entrepreneur thinks.”
McWilliams: “Well I don’t believe Irish developers were entrepreneurs. I actually think they were one-trick cowboys. I don’t believe in a property boom….”
[Murphy tilts his head a little)
McWilliams: “Buying up land, keeping it in a land bank, doing deals all around the place. Like a lad somewhere out there in the Dublin Mountains – releasing that land out into poor developments, in terms of quality, over-priced…[A now-squirming Murphy takes a sip of water]…well equipped with the knowledge that the banks were going to finance you and the poor punters who were buying the over-valued stuff. The Government is going to, because you’re close to them, cause you’re financing them, is going to change economic policy and tax laws to suit you. That’s not entrepreneurialism, that’s cowboyism. Now I’m not saying that in general, I’m saying there are specific examples of people who are not like that. But we’ve got to stand back and realise that cowboy capitalism, as experienced in this country, is not entrepreneurialism. The sort of entrepreneurialism you get in Denmark, or Singapore, or Israel, or Finland, or similar small countries that actually create value.”
……

Murphy: “Who are the insiders?”
McWilliams: Well I’ll give you a great example, right. Nama is a great example of insiderdom, of people who have a vested interest in the status quo in Ireland remaining the same and who are petrified that this crisis will shine a light on them.
Nama was supposed to do two things: get the property market moving and get credit flowing. That’s what Nama was supposed to do. Neither have happened. In actual fact, the opposite has happened. The property market is now weaker than anybody would have possibly imagined it to be. And credit, not only is it not flowing, whatever credit is left in society is getting stuck in the very banks that we are supposed to be supporting. And then you think, well who is benefiting? Cui bono is a very good way of looking at the world. Who benefits? Nama is nothing more than a bailout for the professional classes. I’ll explain that. Nama has over 2 billion euros of professional fees going from me, and the people watching this programme, to lawyers..
Murphy: “Ugh..”
McWilliams: “Estate agents.”
Murphy: “It’s nauseating.”
McWilliams: “Valuers.”
Murphy: “It’s nauseating.”

McWilliams: “I used to see good friends and fellas who wouldn’t know an apartment from a kick in the head and they became, they turned into, you know, stockholders, developers.”
Murphy: “Yeah.”
McWilliams: “And I thankfully, was true to my word in the sense and didn’t get involved in this carry-on.”
Murphy: “Yeah. David, you’re a very confident man. If I even said to you that there might be people who think you are a bit arrogant, would you accept that?”
McWilliams: “No, what I find unusual is you’re asked on programmes to give your view and you give your view and people say you’re arrogant or there may be arrogance. I mean you don’t want a programme like this and get a fella on who says ‘well actually I don’t have any opinion at all’.”
Murphy: “But David, you love being a celebrity.”
McWilliams: “Laughs.”
Murphy: “You do. I mean, there’s no doubt you do. You love being a star.”
McWilliams: “Eh.”
Murphy: “Don’t you?”
McWilliams: “I’ve actually, it’s funny Mike, I haven’t, I’ve never really thought about it. I mean what is a bit sad is when economists get interviewed on programmes like this.”