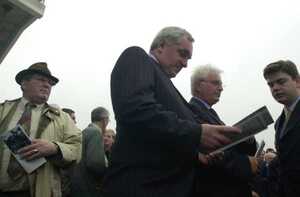 “The only correlation that came to me was George Redmond [former Dublin City and County Council assistant manager]. George would eat his lunch out of a drawer. He loved the comfort of having the money. You just don’t know with Bertie what it was.”

Mr [Ruairi] Quinn’s comments are contained in the book Bertie: Power and Money , by Irish Times journalist Colm Keena which will be published next week.

Royston Brady, the former Fianna Fáil lord mayor of Dublin, says Mr Ahern always had an intense interest in accumulating money. “I would describe him as being borderline eccentric when it comes to money and stuff like that.”

A former Fianna Fáil party activist in Dublin Central, Gerald Kenny, was struck by the similarities between Mr Ahern and Charles Haughey, saying both were driven by a desire for power and were without mercy.

He believes Mr Ahern understood Mr Haughey from early on and modelled himself on him. Both were interested in money, although Mr Haughey used it to buy the good things in life and to aggrandise himself.

“A lot of people I knew were in the party because they thought that was the best way to run the country and was in the interests of everybody. But once Haughey took over it all began to change. Bertie was a direct continuation of that,” said Mr Kenny.

Bertie Uncovered: The Many Faces Of A Former Taoiseach (Stephen Collins, Irish Times)