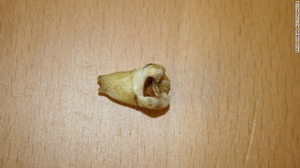 John Lennon’s tooth – to be auctioned in the UK on the 5th of next month:

Karen Fairweather, the owner of Omega Auction house, chuckled when asked why anyone would want to buy the molar and noted that some have expressed interest, while others think it’s gross.

“We get a lot of people buying memorabilia as investments,” Fairweather said. “Or it could just be a fan that really, really wants a part of John Lennon.”

The molar, which has some discoloration and a cavity — probably why it was removed by a dentist — will be available with a reserve bidding price of just under $16,000.

Lennon gave the tooth to Dorothy “Dot” Jarlett when she worked as his housekeeper at his Kenwood home in Weybridge, Surrey, according to her son Barry. Jarlett, who was employed between 1964 and 1968, developed a warm relationship with Lennon, her son said.

“She was very close with John, and one day whilst chatting in the kitchen, John gave my mother the tooth (he had been to the dentist to have it removed that day) and suggested giving it to my sister as a souvenir, as she was a huge Beatles fan,” he said. “It has been in the family ever since.”

The Creepiest Dentist Mascot Ever