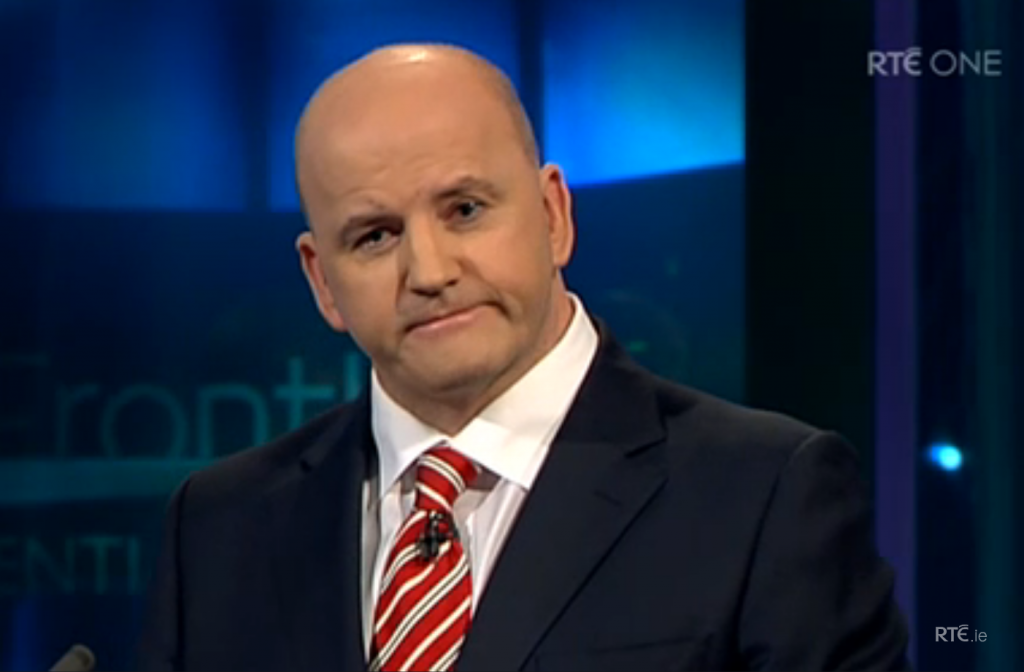 Sean Gallagher’s colourful business and Fianna Fail (Cute Hoor Wing) past finally caught up with him on the Frontline debate.

It came in two parts.

Pat Kenny: “Next question from Glenda Lynch. Glenda, what’s your question?”
Glenda Lynch: “My Question’s for Sean. Sean, given the trail of misunderstandings and confusions and accounting errors and basic improper business practices that seem to have littered your career so far, and given your own total refusal to ever answer a straight question in relation to any of those details, and amidst increasing voter worry that you may just not have the integrity for this job and that you may actually bring the presidency into disrepute at some point in the future as these things unfold. Given all of that Sean, do you still feel that you should offer yourself up for presidency?
Sean Gallagher: “Absolutely, I don’t believe that there is anything in any of the negative campaigning and the raising of those issues that shows that in any way I have shown anything but integrity. And there is nothing in there that I have ever done that can cast any aspersions on my character. Everything I have ever done is 100% above board and I stand over my track record for a decade and a half…”
Kenny: “Sean, hang on a second. The issue of the rather large cheque that
rested in your account until it was pointed out to you by your accountants that it should have been in your company account rather than your in personal account…”
Gallagher: “It wasn’t a personal account… Let me explain…”
Kenny: “Hang on a second, I just want to know, how does someone mislay a cheque for 89 Grand?”
(Audience claps)
Glenda Lynch: “Sean, what customer pays somebody a cheque for €89,000? Who
could that customer have been? This is for motivational speaking. That’s an extraordinary fee and I think most people would be really interested to know where did this cheque come from? It’s an incredible size.”
Gallagher: “Firstly it is not related to speaking, it is related to business interests I have. Can I explain that the cheque in fact was made out to the wrong account and unfortunately, the book-keeper’s secretary, who works for me, put it into the account which was written on the cheque. When the accountant’s firm, who does my accounts, came across it and spotted it in the wrong account, what they did was alert me to the fact and within less than four weeks the matter was resolved and I am absolutely 100% happy and satisfied from my accountancy firm that no breach took place.”
Glenda Lynch: “Sean, do you understand that what you just said makes absolutely
no sense to anybody who is involved in any kind of a business? Was the money income from that company or was it not? If it was, it was correctly put in your accounts as a loan to Sean Gallagher; a loan that was almost 70% of the profits of that company for that year? You do understand that, don’t you?”
Gallagher: “No, let me explain…”
Glenda Lynch: “Please do.”
Gallagher: “You’re misrepresenting me. I have more than one company and therefore the company name on the cheque was incorrect, and the cheque was lodged to the name that was on the cheque. Therefore by the time that the accountants in doing reconciliation of the accounts noticed it, they then allocated that as a loan. I didn’t take the money out of the account, the money was in a different account. The book-keeper rectified that with the accountant and it was placed back in the right account and no breach took place.”
Glenda Lynch: “So, on which account did you actually pay VAT or tax or anything
else? In which account was it real, Sean?”
Gallagher: “I can tell you now…”
Glenda Lynch: “The name of the account would be very helpful….or the company
that is involved.”
Gallagher: “I can tell you now 100% that I am absolutely 100% tax compliant.
There is a tax clearance certificate on my website, absolutely cast no aspersions on myself.”

Pat Kenny: “A development which I want to put to Sean Gallagher. On the Martin McGuinness for president Twitter account, Sinn Fein are saying they are going to produce the man who gave you the cheque for five grand. Now, do you want to change what you said or are you still saying that it simply didn’t happen? Are they up to dirty tricks or what?”
Gallagher: “Well, you know I’ve always tried to stay above any negative
campaigning and I understand from a query during the week in one of the newspapers and when my campaign team sent back the information on the said character, I don’t want to cast any aspersions on him….”
Kenny: “So you know who he is?”
Gallagher: “He’s a convicted criminal, a fuel smuggler, investigated by the Criminal Assets Bureau and rented the office out to Gerry Adams, Martin’s colleague, in the last general election. I don’t want to get involved in this, I don’t believe….”
(Audience noise and cheers)
Kenny: “Can we put this to rest now. Did you get a cheque from this guy or not?”
Gallagher: “I have no recollection of getting a cheque from this guy…”
(Audience boo and hiss – someone shouts “Liar!”)
Gallagher: “I can tell you, let me explain this very simply.”
McGuinness: “The man said you went to his house Sean.”
Gallagher: “I explained that they’re were two or three people that I asked….invited, I don’t know the man very well that’s in question…”
Kenny: “Hang on a second, you’re saying you went around to a fuel smuggler and all sorts of things and invited him to a Fianna Fail do?”
Gallagher: “I’ll tell you quite simply Pat, I was asked…”
Kenny: “No, You labelled him one thing and yet you invited him, so which is it? Or are you happy with both?”
Gallagher: “I wasn’t aware at the time 3 years ago. I’m just making the point that I was asked to pass the information on to local business communities which I did. I want to say one thing. This is not what the presidential election should be about.”
(Audience clap – someone says “absolutely”)
Kenny: “Martin McGuinness, do you want to…..? briefly?”
McGuinness: I think Sean should answer the question. And the question is, did he go to a man’s house, a man who spoke to me on the telephone several hours ago, and collect a cheque for €5,000 euro?”
Gallagher: “What Martin has said is that I drove to the man’s house to deliver a photograph of the event and that he gave me a cheque. I may well have delivered the photograph if he gave me an envelope…I…”
(Audience laughs)
Gallagher: “The point is, if he gave me the cheque, it was made out to Fianna
Fail headquarters and it was delivered, and that was that. It had nothing to do with me.”
McGuinness: “That’s a clear admission of what I said earlier.”
(Audience claps)
Kenny: Michael D Higgins, do you want to say anything on this, Michael D
Higgins?
Michael Dee Higgins: “I think that it’s very important that there be absolutely full and total disclosure and resolution of this and as quickly as possible. You know, what you say when you take the office of President, (recites Irish) I dedicate my abilities to the welfare ofthe people of Ireland… That’s all of the people of Ireland and
it’s far beyond any of this kind of thing, quite frankly, and I do think we should, in a way if we can, I think these matters should be clarified, they’re quite urgent…”
Kenny: “Hang on a second Michael, it’s all very well to be pious and all the rest of it.”
Higgins: “No, it’s not pious, it’s a man being straight.”
Kenny: “No, hang on, you want to be judged on your record. If there are things that we need to know about all the 7 candidates, about their record, we need to know it. So, you want to walk away from this particular controversy…”
Higgins: “No, I don’t at all. Could I have said more clearly that the matter needs to be clarified? And as a matter of urgency and immediately. And I think that’s very… that’s what the public want, you know in the end it isn’t about us 7 here, it’s about what’s good for Ireland and what’s good for the Irish people.”