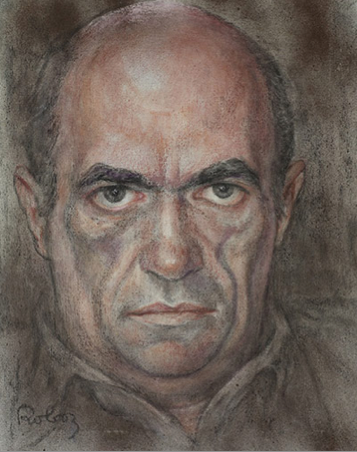 I prefer to be silent while I work – too much chit-chat can be fatal – and instead like to listen to music. I always ask the sitter what they would like to hear, and was delighted when Colm Tóibín chose the Hungarian composer Kodály. However, I needn’t have worried that anything might distract Colm or I from the sitting, for Colm held this astonishing and unflinching pose for hours. He is a godsend to any artist! 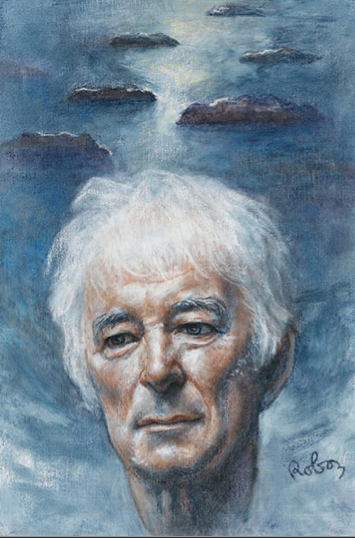 After our meeting, Seamus Heaney sent me a copy of the book Stepping Stones, a collection of detailed interviews he gave Dennis O’Driscoll. In the inscription he writes that he admired the work I did when ‘faced with an older face’. The letter that accompanied this gift described his portrait as ‘frank and firmly decided’, and I do try to portray the sitter as I see them, and not ‘do an injury to them’ (a description Francis Bacon once applied to his work). In this portrait I drew on Seamus Heaney’s own words (from his 1995 Nobel prize address), and chose to portray his face beneath a series of stepping stones. 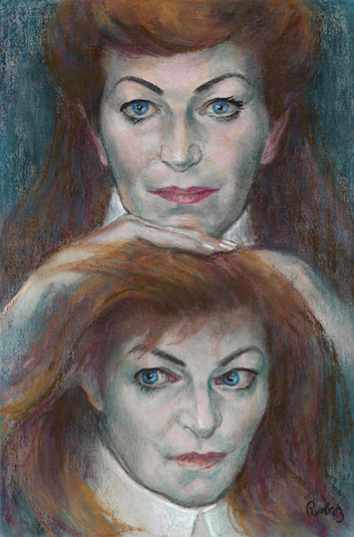 Of all the sitters I have drawn, the difference between the author’s character and the books they have written was never greater than with Josephine Hart. For this reason, I could only paint her as a double portrait, which I entitled ‘Dichotomy’. One shows Hart as one would meet her: calm, balanced, confident, happy, a mother, a grandmother, a successful bestselling author. The other is the inner woman as I imagine her: the beautiful Irish lady with wild hair, whose imagination has been shaped by a traumatic childhood, and who is therefore all too well acquainted with the cruel and dangerous side of life. In a letter written to me after she had seen the portrait, Josephine said that I had ‘revealed [her] to herself’.

Face To Face With Writers – In Pictures by Zsuzsi Roboz (Guardian)