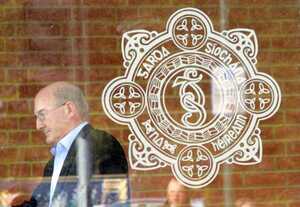 Tom Lyons, of The Sunday Times and co-author of The Fitzpatrick Tapes, went on Lunchtime on Newstalk (with Jonathan Healy) to discuss the arrest this morning of former Anglo director Willie McAteer (above) and the payment tomorrow of €750 million to the bank’s unsecured bondhoders.

This will tend to make you very upset. It’s turned Chompsky right off his food.

Jonathan Healy: “Tom, what do we know about the arrest this morning of William McAteer?”
Tom Lyons: Well we know that this is the second time that Willie McAteer has been arrested. The first time was in March 2010. The big issues facing Willie is his role as Finance Director and Chief Risk Officer of the bank, which meant he was somebody at the heart of the bank at the time when some big decisions were being made. The big, likely focus is going to be on the whole issue of Irish Life and Permanent and how €7 billion was used, was taken from Irish Life and Permanent and used to boost Anglo Irish Bank’s balance sheet at a crucial time as Finance Director and Chief Risk Officer. It’s obviously of great interest to the gardai what he might have known about this. And the second issue he’s gonna face is a personal issue, which relates to €8 million he borrowed from the bank.
Healy: “€8 million?”
Lyons: “€8 million. Which wouldn’t have been that much at the time. The issue is around how the loans were initially given. They were given with only…they were only secured on his Anglo shares, which promptly went to zero, so that was a big issue for him. He then changed this to full, personal recourse but I think the gardai are going to be asking questions about the circumstances of that and should have he been granted the loan in the first place.”
Healy: “This is the second time he has been arrested. When was the last time he was detained? Do you have that…it was a couple of months ago if I remember?”
Lyons: “It was March 2010, so it’s a long…”
Healy: “It’s over a year.”
Lyons: “It’s over a year ago, so you can see the very, very slow pace that this investigation is going at, that we’re only getting around to the questioning of the Finance Director of Anglo Irish Bank, for a second time, at this, at this very late stage.”
Healy: “Ok, well he has been detained, as I said, under Section 4 of the Criminal Justice Act and that allows for him to be questioned for up to 24 hours, we’ll watch that space, Tom. But we’ll park that particular issue there for now because Anglo is in the news for a very different reason aswell. This payout to the senior bondholders, the unsecured bondholders, is it one of more than one? Do we know who is going to benefit to the tune of €750 million tomorrow?”
Lyons: “No, we don’t know which is one of the most outrageous things about it. We’ve got $1billion being paid out to various bondholders and we’ve no idea who they are or how much money they are going to make. We know that we’re paying them 100 cents in the Euro, they’re being paid, everything is being repaid to them.”
Healy: “This is the full deal, even though they were unsecured so, effectively to use layman’s terms, they were taking a gamble by putting money into this bank, the bank is now closed, it’s gone and it is being wound up. Yet, they’re still getting the payout?”

Healy: This is the full deal, even though they were unsecured so, effectively to use layman’s terms, they were taking a gamble by putting money into this bank. The bank is now closed, it’s gone and it is being wound up. Yet, they’re still getting the payout?”

Lyons: Worse than that, the original people who would have put this bond up, most of them have sold out to hedge funds at say 20/30cents in the Dollar and they sold out because they figured ‘Ireland isn’t going to be foolish enough to repay us’/
Healy: “Oh, how naive of them.”
Lyons: “So it’s the hedge funds that took the gamble that Ireland was going to repay 100 cents in the dollar who are going to clean up here. And I’m guessing there’s going to be a lot of people, very happy people in London and New York.”
Healy: “And this is, as you said, effectively taxpayers’ money.”
Lyons: “This is effectively taxpayers’ money and this is an absolutely ginormous scandal and it just seems extraordinary that, you know, we have Willie McAteer, who’s been knocking around for three years now, being arrested on the very day before we make this outrageous payment.”
Healy: “On the payment, on the issue of the payment, the Government is saying: ‘this is part of the deal that was done by the last coalition’. Now that excuse is wearing pretty thin at this point. But the real situation is that the European Central Bank, even if Michael Noonan wanted to burn these guys, which he’s suggested in the past, that he might have considered, they can’t because the European Central Bank is saying ‘I know you’d like to do this but you’d do untold damage to yourselves and you wouldn’t re-enter the market next year’.”
Lyons: “Well I think the real thing with the European Central Bank is that it has hundreds of billions, it has pumped hundreds of billions into the Irish economy and, as a result of that, it’s keeping the banks open, it doesn’t want to see a default in anyway, in terms of Ireland at this time. It’s trying to limit the disaster to Greece and keep it down there…”
Healy: Which is difficult…
Lyons: “Which is difficult and it’s going to be the Irish who are going to have to pay the price for that. So we’ve been very, very good and we’re paying bondholders, who most people would expect, with a bank crash, you would expect those people wouldn’t be paid in full.”
Healy: “But the point that’s being made, and it was made on Newstalk Breakfast this morning, was that if we decide ‘hang on a second, the Greeks are getting a 50% haircut, we’re going to sting the bondholders here aswell, that is, in the short term, you’ll obviously get the benefit of the $1billion or the 700 and odd million euro but, in the long term, you’d be doing reputational  damage. And the one thing that the Irish have been very good at so far is trying to restore our battered reputation internationally. Is there any argument for that, because that’s what the Government is saying is probably the main reason why we are, painful and all as it is, paying out this money tomorrow?”
Lyons: Well that’s the argument being put forward by the Government and if that’s the case you’d wonder why they won’t disclose the names of the bondholders/
Healy: “And why won’t they?”
Lyons: “If we could see that they were big pension funds from Germany, who are going to back us in the future, if we could see that they were blue-chip banks, who are going to back us in the future, I could, you could certainly see their argument. If it’s a case that it’s not blue-chip people that are going to support us in the future, but instead it’s speculators, I think that would be a very different argument that we would be having but unfortunately those names are being kept secret.”
Healy: “Will we ever find out who these guys are, because is this going to go into infamy as a group of people who will be popping the champagne corks tomorrow, the Irish people will have to suck up €3.6 billion cuts in the budget and we’ll never know who these guys were?”
Lyons: It’ll take an extraordinary leak for it to happen because it’s, certainly, these types of things, they aren’t accessible under the Freedom of Information Act We can’t do an FOI to the NTMA and I also think that in terms of doing an FOI to the Department of Finance, it also wouldn’t work. I think it’s something that we’re just going to have to suck it up and hope that the Government is correct in its position and that eventually we will be able to return to the markets. But it is worth recalling that this is, this $1billion, there will be other billion dollars next year, which will have to be repaid, who are similar, who are similarily in a weak position and you wonder are they going to be paid in full too?”
Healy: “But those guys are probably laughing now because they’re saying ‘ah look the Irish, much and all as we expected them to default, in some shape of form, sure they’re happily towing the ECB line, we’re gonna get our money next year’.”
Lyons: “Well absolutely, I mean they’ve been rewarded for taking a risk in buying…or the people who bought these bonds at less than 100 cents in the Euro at say 20 or 30 cents in the Euro, they are being rewarded magnificently to the tune of hundreds of millions.”
.
Previously: The Anglo Bondholders: The Complete List
.