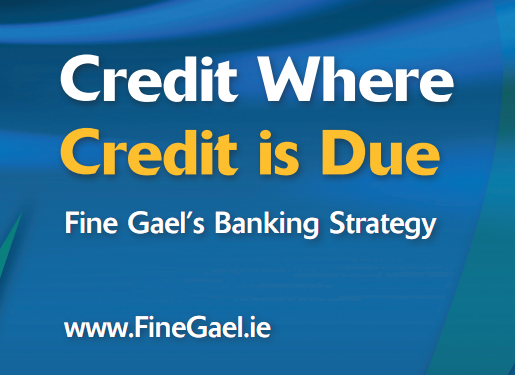 2.2 Agreed Procedures For Agreeing The Debts of Troubled Banks

“Irish and other european taxpayers can no longer be expected to carry the can for reckless lending between irish and other european banks. It is a basic rule of capitalism that if you lend recklessly, you must take the consequences.Fine Gael in Government is committed to forcing certain classes of bond-holders share in the cost of recapitalising troubled financial institutions. this can be done unilaterally for the most junior bondholders (owners of preference shares, sub-ordinated debt and similar instruments), but should be extended – ideally as part of a european-wide framework – for senior debt for institutions like Anglo irish and irish Nationwide that no longer have any systemic economic importance.”

Anglo Irish Bank and Irish Nationwide have no further role to play in the Irish economy. A Fine Gael  Government will wind up both institutions by the end of 2011, by transferring their remaining assets and deposits to NAMA, other financial institutions or other asset recovery vehicles as appropriate. Further losses incurred in this process will be shared with remaining unsecured bondholders.

“Part of the existing agreement with our external partners is not to allow any Irish bank, including Anglo Irish Bank, default on its debts tobondholders for fear of paralysing wider European financial markets.I share the Irish public’s dismay at the cost and unfairness of this policy and the delay it caused to the State’s recovery. But the unfortunate truth is that the vast majority of Anglo’s debts were paid off under the previous government. Of Anglo’s €97 billion in liabilities in September 2008 when the previous government offered it a blanket guarantee, €3.3 billion in unsecured private debts now remain, including the €700 million due for repayment today. This horse has well and truly bolted.

In the absence of support from our external partners, potential gains to Irish taxpayers from forcing the bank to default on these bonds, while not insignificant, do not justify the enormous risks from such a courseof action. Allowing Anglo to default would create doubt over the future of the €110 billion in funding being made available by the European Central Bank and the Irish Central Bank to Irish banks at a low interest rate and could mean a renewed flight of funds and even tighter credit conditions for potential Irish job creators.”