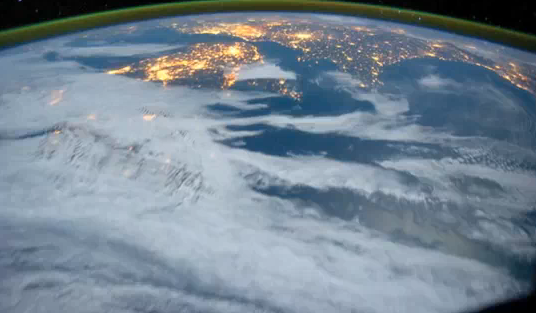 This video was taken by the crew of Expedition 29 on board the International Space Station.  At the beginning of the video, the Aurora Borealis can be seen in the far left along with clouds over the North Atlantic Ocean. Tracking southeast, the first view of lights is from the United Kingdom (Ireland, uptrack from the UK, is under cloud), with cities like Liverpool and London showing up nicely. Across the English Channel, the cities of Brussels and Rotterdam (left) and Paris (brightly-lit city west of Brussels) all stand out through a network of smaller cities in Western Europe.

Then you have the Mediterranean Sea, with Greece (ha!) to the left, northern Africa on the right, and the island of Crete and finally finishing near the Nile River Delta and the Red Sea.

But, you know, whatever.