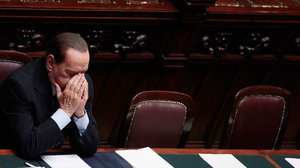 Italian Prime Minister Silvio Berlusconi on Monday denied he was about to step down, telling a conservative daily he wanted to ‘stare in the face those who try to betray me’ when he calls a parliamentary vote of confidence on Tuesday.

‘I don’t understand how rumours about my resignations have circulated. They are groundless,’ Berlusconi told the right-wing daily Libero.

The Italian media had quoted unnamed sources close to Berlusconi’s PDL as saying that the premier would make a last-ditch attempt to assemble a parliamentary majority or resign by Tuesday morning.